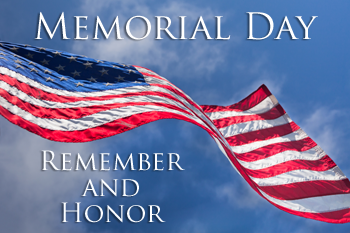 Internet Business Ideas and Marketing wants to thank those who currently and have served our country. The sacrifice made by individuals and their families can never be repaid. Memorial Day is a day of remembering the men and women who died while serving, whereas Veterans Day celebrates the service of all U.S. military veterans.

The practice of having an annual day to honor those that have fallen in battle go back to the early 19th century. It has been documented that the Romans and Greeks had such a holiday but one of the earliest commemorations on U.S. soil (May 1st 1865 in Charleston S.C.) was organized by 1,000 recently freed slaves after the civil war. They were also accompanied by regiments of U.S. colored troops and a handful of white Charlestonians. In May 1868, General John A. Logan is said to have declared “May 30th Decoration Day” (later to be known as Memorial Day). Decoration Day became a national holiday in 1971 in which the name was changed to Memorial Day. Many states claim to be the founder of this day of remembrance. Although most see this holiday as beginning of the summer months, party time, and another long weekend, please take a moment to remember those that have passed away serving our country. May we always have peace and use war ONLY as a last resort.